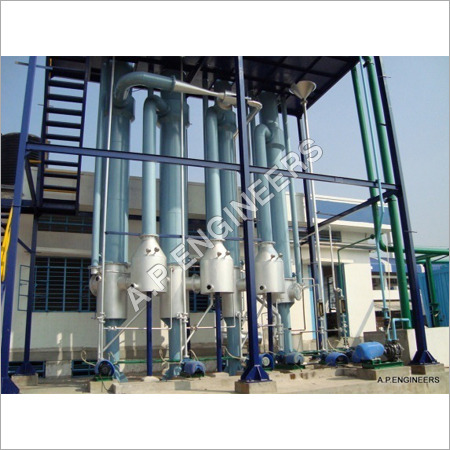 In order to meet maximum level of clientsâ€™ satisfaction, we are engaged in manufacturing and supplying a broad range of Falling Film Evaporators. These evaporators are extensively used in various industries for handling reverse osmosis rejected water. This range of evaporators is made available in plethora of technical specifications according to requirements of our esteemed clients. Our experts manufacture the offered evaporators with the help of quality assured material and contemporary technology. We offer these Falling Film Evaporators to clients at competitive prices.

Falling Film Evaporators, water is boiled in a sequence of vessels, each held at a lower pressure than the last. Because the boiling point of water decreases as pressure decreases, the vapour boiled off in one vessel can be used to heat the next, and only the first vessel (at the highest pressure) requires an external source of heat. This is called multiple effect and no of stages / effects is depend on quantity of vessel / calendria in sequence. Theoretically, one kg of steam evaporates one kg of water. In multiple effect evaporator, one kg of steam evaporates up to 6kg of water by no of effects and vapour recirculation by thermo vapour recompressor. It is called as steam economy 1:6.


Feed is preheated to nearby boiling temperature in Pre heater that connected with all calendria. All calendria are operated at stage by stage vacuum with reduced temperature. So feed is preheated by stage wise from lower temperature to higher. Then it is passed via first calendria tube bundles as fine film layer over the tube surface area. In shell side fresh Steam is given via Thermo Vapour Compressor. Feed is heated and evaporated in calendria. Evaporated Vapour is separated in Vapour Separator, vapour is sent to second calendria Shell side. Un evaporated feed is transferred to second calendria tube side. Here further evaporation is done. So each calendria evaporates feed and concentrate coming out from last calendria. In this system, concentration is achieved by stage by stage and each calendria have higher concentration as stage increases.


A part of evaporated vapour is recycled to first calendria via thermo vapour recompressor. In Thermo Vapour Compressor, Fresh Steam with pressure is passed via steam nozzle. Steam produce high velocity and produce a venturi Effect. This will recirculation a part of evaporated vapour. By using Thermo Vapour compressor and multiple stages, steam economy up to 1:6 is achieved. This result depends on feed water quality.

We installed many falling film evaporator capacity up to 280KLD for various industries. Mainly falling film evaporator are suitable for handling reverse osmosis reject water and having more than 40,000mg/l TDS. This system evaporates up to 90% of feed and gives concentrate 300gram per litre. This concentrate is dried in drier / crystallized in crystallizer / or handled with forced circulation with pusher centrifuge.

A. P. ENGINEERS
Other Products in 'Industrial Evaporator' category 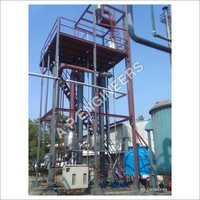 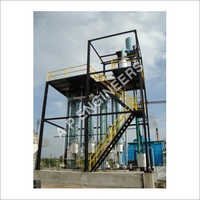 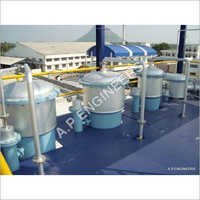 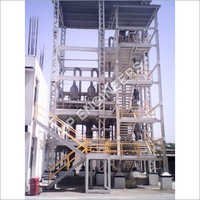 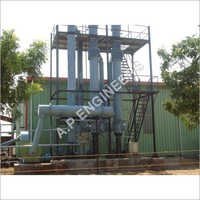